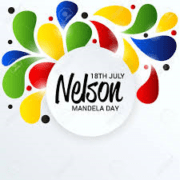 The birthday of our former President Nelson Mandela, born on 18 July 1918, has come to represent a day in which we remember what he in his individual capacity has done for our country and what we in turn can do for each other.

The Mandela Day campaign message is simple: Nelson Mandela gave 67 years of his life fighting for the rights of oppressed humanity and in turn all South Africans are asked to give 67 minutes of their time to make a difference in the lives of others. Former President Mandela in his own words was clear that the message is passed on from generation to generation when he said “it is in your hands now”.

The values which Madiba’s life and legacy represent include democracy, freedom, equality, diversity, reconciliation and respect. Many people and organisations globally take part in various activities to promote Nelson Mandela Day by encouraging people to recognise their individual power to make a difference and change the world around them for the better.

Mandela Day has become an annual opportunity for IMATU to engage in social responsibility initiatives and take responsibility for changing our communities in honouring Madiba’s legacy.

This year, IMATU notes with deep regret, the premature passing of Zindiswa Mandela, the daughter of former President Mandela and struggle stalwart, Winnie Mandela.  Zindiswa has been recognised as someone who devoted her life to equality and had, in her own right, been an icon in the task of securing freedom for the people of South Africa.  We extend our deepest condolences to the Mandela family in this very difficult time.

This year, IMATU is commemorating Mandela Day as follows:

Our Eastern Cape Region is distributing perishable and non-perishable food items to the Home of Joy Child and Youth Centre in Makhanda.

Our Cape Metro Region has donated R30 000 to a child care facility in Khayalitsha, the Fikilela AIDS Project.  The Region is most proud at having been associated with this project for the past 6 years, and are thrilled to witness the fruits of their annual donation in the improvement of the care facilities for the young children at the centre.

The Tshwane Region is delivering the following items to the Tshwaraneng Home: groceries, toiletries and facecloths, paint and painting accessories, fruit and vegetables, a temperature scanner (kindly donated by Paper Place), sanitisers, gloves and specially produced Mandela Masks.  The Home is the permanent shelter for 18 children, who will also be receiving lunch and colddrinks from the Region, on Monday 20 July 2020.

The Gauteng Region is making a donation to the MES organisation in Kempton Park.  This organisation looks after homeless and vulnerable members of the community in the Kempton Park area and surrounds.

The National Office is partnering with the Johannesburg Region and will be donating sling bags containing sanitary towels, soap bars, beanies and pens, to the Purple Foundation.  This non-profit foundation was born in the heart of Annari du Plessis, founder of Crossroads in 2012. Crossroads is a Trauma and Community Centre that gives assistance to members in the community who are hurt and failed by role players or who needs assistance during traumatic incidents.  The success of Crossroads led to the birth of the GO PURPLE FOUNDATION in 2014.  They carry the badge of bullying, humiliation, arrest, jail time, abuse, emotional abuse and prosecution with pride as they are unstoppable in running the race to rescue those in need of care and protection and to bring hope, healing and victory to anyone who has survived trauma, especially acts of sexual violence.  They are the public voice and face for hope during these traumatic events.  Annari is assisted by Selina Mokheseng, Operational Manager and various community leaders and voluntary workers from the community and schools.  They work closely with the local Police Stations.

Our Kwazulu Natal Region is making a R10 000 donation to the Imizamo Day Care Centre in Kokstad.  This preschool is located in the Bhongweni township, and had previously been run from a shack which later got demolished.  The preschool currently looks after 63 children from birth to 5 years old, and will be using the funds donated, to help build a permanent structure for the children.

In eThekwini, the IMATU Regional Office is donating R30 000 to the Umlazi Junior Primary School, which is one of the most indigent schools in Durban South.  This school has 1021 learners registered.

WHAT ARE YOU DOING WITH YOUR 67 MINUTES?