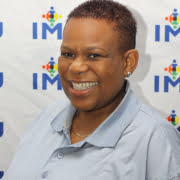 At a meeting of IMATU’s National Executive Council held on 25 June 2020, Ms Queen Mbatha was elected as the new Deputy President of IMATU.

Ms Mbatha was employed in the Treasury Department of the eThekwini Municipality during 1994 and joined one of the Unions that subsequently amalgamated to form IMATU. Ms Mbatha has been a shop steward since 2002 and has served on the eThekwini Regional Committee since 2007 in a number of portfolios, and as Vice Chairperson since 2010. Ms Mbatha has also served as a member of the National Executive Council since 2010 and held various positions on the Human Resources, Labour Relations and Finance Committees of the NEC.

Ms Mbatha was elected as the Vice President: Finances at the 2016 Congress, and has also recently been elected as the Regional Chairperson of eThekwini Region.

Ms Mbatha is the second woman to serve as Deputy President of IMATU and this is indeed confirmation of the great strides that IMATU has made in transforming our structures at the highest levels.

Ms Mbatha encourages women to grow their self-confidence and resilience, and step up into leadership positions for the good of our Union and our members.